Today’s technology, including personal recording devices and video sharing sites such as YouTube and other social media, have made movie-making accessible for just about anyone. Why not your group? 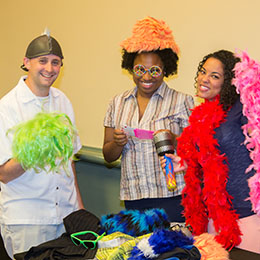 During the Make a Scene event, teams are challenged to make a video to rival the popularity of any singing dog, ugly cat, or dancing toddler currently receiving millions of views. But don’t worry – we won’t share these videos online! These videos will only be shown to your group where they will be judged for creativity.

The group is split into teams and each is given an iPad including Make A Scene directions with tips on how to make their video. Only videos meeting certain criteria will be considered for an award. For instance, the video must feature at least three different backdrops and a minimum of 5 props. Guidelines on the theme of the video are up to you. Should teams illustrate what it is that makes your company great? Should its focus be on one of the goals or theme of your meeting? Anything goes!

Everyone gets involved in the action – participants must write, direct, act in and edit their video. At a set time, all videos are submitted and it’s time for the awards ceremony to begin. 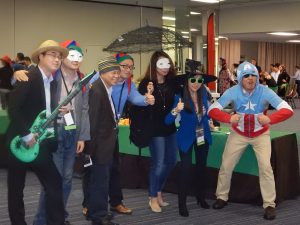 for the judging, which is conducted by the participants themselves. Each participant is given a voting slip and asked to vote for best video – the only hook is, they can’t vote for their own team! Ballots with team numbers on them are provided to ensure this does not happen. For instance, Team #1 members get a Team #1 ballot and if a vote for Team #1 is turned in on this, it is thrown out. Participants also get to vote for the best actor, best actress and best drama queen out of all videos shown – even their own.

After a brief intermission, the votes are tallied. Then, the winners in each category are revealed and called forward to receive their prestigious awards.

This is one event your company should make time for – it’s sure to be a fun scene!

Please note – In order for the iPads to record outside properly, this event must be held during daylight hours.