Close your eyes and picture the look of excitement on a child who has just received a brand-new toy. Now picture 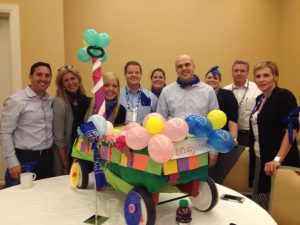 a second child, one who has never received a new toy…or a toy at all. Now, imagine what it would be like to put that same look of excitement on that second child’s face, all by participating in this team-building activity.

Teams will assemble a red wagon at their table and decorate it with items such as streamers, balloons, pipe cleaners, construction paper, etc. The team that is judged to have the best decorations wins a toy to place in their wagon.

Didn’t win a toy for best decorations? No problem! There are lots of other opportunities to win toys in a round of challenges that are played around team tables. Sample challenges may include:

The team with the most toys in their wagon at the end of the event wins award medals. But, everyone will have an award-winning feeling in the pit of his or her stomach when they turn the toy-laden wagons over to the charity to pass along to the kids!